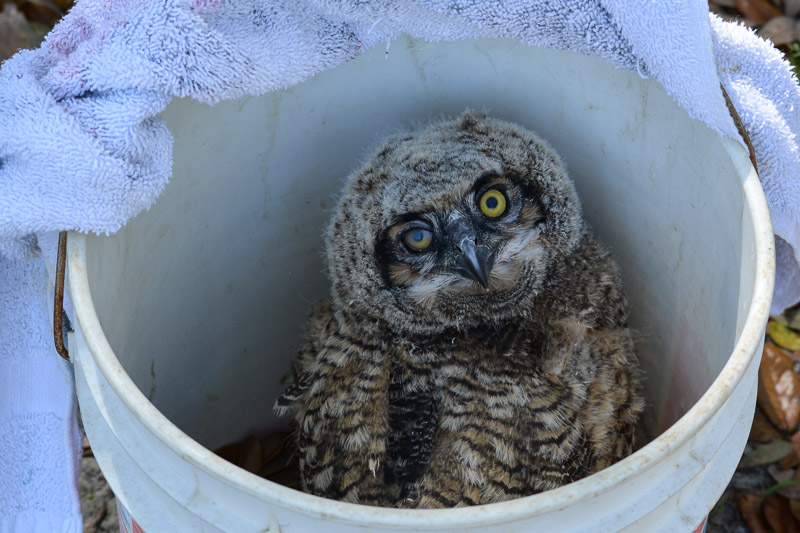 No, not ‘our owl’. Since last year, Scott and I became volunteers at The Center for Birds of Prey.  We are officially members of the Renesting Program.  We are on call to renest birds of prey chicks that have fallen out of the nest.

Great Horned Owls are the first of the nesting season for birds of prey. The Center got a call on Tuesday, March 17th, that there was a baby owl on the ground. And we got the call. Our first ‘mission’!

I am embarrassed to tell you that I went to the reported area and could not find a chick anywhere! I look and look. No chick. I call Joe, the guy that reported it while walking his dog, to get an exact location. I am in the right place. No chick. An adult parent is clacking whenever I get close to a particular tree.

Kind of like that old game of Hide the Button – getting warmer, no getting cool, colder. Adult clacking means I am close. No warning sounds mean I am really cold. The area around the tree that elicits the most warning alerts from an adult owl is full of all kinds of interesting evidence: a headless baby squirrel, three adult squirrel tails, owl pellets and lots of white poop.

But no chick. I listen. I am quiet. My first assignment and I cannot find the chick! I knock on doors. Explain. Leave notes on doors of ‘not at home’ nearby residents with my contact information. I go home defeated.

Four hours later, Joe calls back. The chick is sitting out in the open, pretty much exactly where he told me he saw it that morning. By now, Scott is home and we gather our gear and head out. Joe has recruited a neighbor kid to stand watch until we get there.

Sure enough. A Great Horned Owlet is just sitting there next to a pine tree, out in the open, in total and complete site!

Scott and I confer. There is no visible nest. And this chick is developed beyond the nestling stage. It is a Brancher but not able to fly yet. I examine it as best as I know how. I hold its talons and unfold its wings, one at a time. All looks good. The chick is amazingly compliant. An adult owl is clacking its beak but from a safe distance.

Scott and I decide to place it in a large Live Oak Tree. We get permission from the homeowner. We put the chick in a bucket, Scott sets up the ladder to reach a crotch (or nook) in the tree, about 20 feet high. We discovered last year that a bucket was the most expedient and safest way to carry a chick up a ladder – for all involved. I explain to neighbors that have gathered to watch what and why we are doing this and also what to expect. And give everyone our contact information.

What we expect: this will not be the one and only time we are in this location. We know from our experience from last year (with ‘our owls’) that this will most likely be the first time, not the last.

Not too secure looking. As, ahem, now that we are ‘professional renesters’, we are not supposed to attribute human feelings or characteristics (anthropomorphism) to our feathered creatures. BUT clearly, this chick does not look too happy. We pack up our gear and watch from a distance with binoculars. Parent owl communicating with chick by hooting softly. Chick is silent.

Looking a little more relaxed now. And safe. This is all we can do. As Joe texted when I gave him an update, “I would say that young owl had the luck of the Irish on its side today.” Indeed.

But that is not the end of the story of our first mission. Followers of this blog from last year’s adventures will recognize that there is almost always another chapter. Stay tuned!

Special thanks to Joe for his diligence in reporting this fallen chick and following up on its status to make sure it was safe and secure. And to the neighbors Rachel, Emily, Elizabeth and others for whom  I do not have all their names. Thank you!

All summer we have heard and seen the owls hunting – both parents and one juvenile (previously known as the owlet Happy Feet).  It is always too dark to photograph them at dusk and dawn when they are actively hunting. The parents  still provide prey to the youngster. This we have deducted from their behavior as we watch and listen.

A few weeks ago, Vanessa and I kayaked at high tide (for access) over to the The ISLAND and walked around with our cameras  during the day when the owls are roosting. There is heavy undergrowth on The ISLAND and the pine trees are very tall. We spotted the juvenile owl from our kayaks on the approach to The ISLAND by way of a narrow creeklet that surrounds the high ground. Yes, the same creeklet that was the scene of several owlet rescues from near drowning. See earlier posts.

We observed the young owl in the same tree that I have seen it in while kayaking sans camera. It seems to be its favorite spot. In the feature photo at the top of this post you can see why sometimes they are hard to spot, especially at low light. Both parents and their teenager hang out on The ISLAND most of the day.

Happy Feet is almost all  grown up with adult feathers and distinguishing ‘ear’ feathers. But it still relies on Mom & Dad for food. Just like a teenager! BTW I asked HF whatever happened to MiniMe and he had no comment. There is always a parent in close proximity. They are very difficult to spot from distance or from the ground looking up into the tall pines. We think this is Dad.

Almost every morning, if I am up early enough with the binoculars trained on the t-top of our boat, I can see and hear the young adult calling for its breakfast. And then a parent flies in and delivers a small rodent or bird. It is too far away to get a clear photo. Attempts to get closer result in a fly away. I guess it is about time I invested in a tripod and learned how to use the wireless remote! And buy a bigger lens!

Please note that our t-top still has two layers of recycled bill board tarp that Scott and I made to protect our canvas from owl talons and beaks. So attractive!

And this is the view as I turn back to the house. Dawn breaking.