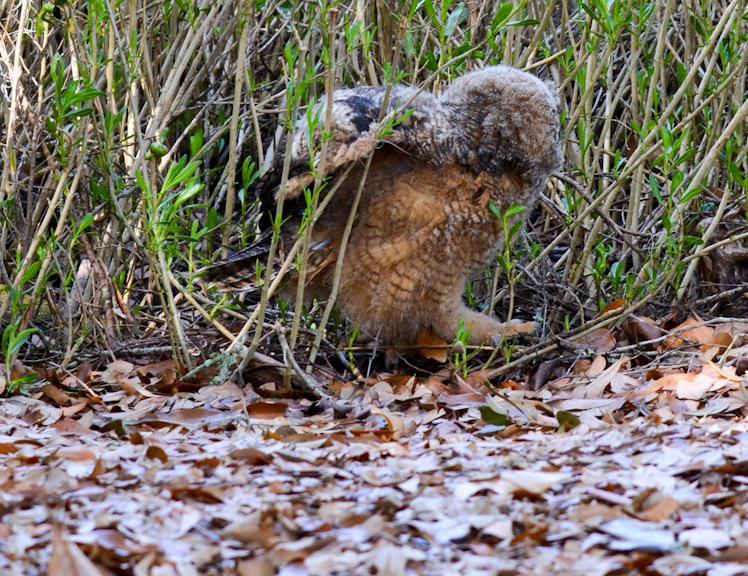 This is the rest of the story of what happened on March 20th. It was a very long journey. It was quite a distance on foot (er, talons) for an owlet and it took a really long time.

We left off with MiniMe jumping out the back door of the nest tree, just hours after The Examination.

This would be the third attempt within two hours to get MiniMe off the ground and into a safer place. (Since The Examination). If I had not been observing it the whole time there is no way I would believe this is the same little owlet I found completely spent and bedraggled in the marsh in the early morning, defenseless with a rising tide.

Below is MiniMe immediately after jumping out of third tree into a pile of leaves. I am sitting nearby and hear this big whumph! I don’t even have to look to know what happened.

I laugh! There is no stopping this little owlet from trekking across the marsh. Where is it going? It’s destination? THE ISLAND. (I know, this is beginning to sound like the owlet version of the sequel to Lost!)

But of course I do! I sit on the out back deck in our garden with camera and binoculars. I have given up on the red gloves. I keep track of MiniMe’s progress, first through the needle grass and then across the open marsh. It takes long rests every 20 to 30 yards. The rests last from 45 minutes to an hour or more.

BTW Big Sib has been in the Live Oak tree, in approximately the same place since its rescue from the marsh over a week ago, Saturday, March 15, 2014. The bigger owlet learned its high tide marsh lesson the first time. And it has been on especially good behavior since witnessing MiniMe’s Examination!

Not so much with MiniMe. To be continued…..

2 thoughts on “Marsh Journey to “the Island””